Every spring, the UN International Day of Forests (March 21st) and Arbor Day (April 28th) bracket a sobering month of reflection on the state of our forests. We now recognize the countless, essential ecosystem services provided by forests, as well as their role as a source of building materials, fuel, foods, and medicinal plants.  Yet the world’s forests remain under threat from poor management decisions, agricultural clearing, population growth, illegal logging, and climate change, and scientists have concluded that our planet is experiencing its sixth mass extinction of species, much of this tied to the loss of forests.

Never before has it been so important for governments, private landowners, and NGOs to work together through these problems to find workable solutions.  One person who has supported this process every step of the way is Dr. Robert J. Hrubes, now retiring as long-time Executive Vice President of SCS Global Services, and among the world’s most effective forest champions for four decades.

In his February, 2017 blogpost, “Witnessing Changing Sustainability Norms for the World’s Forests,” Hrubes wrote about his growing disillusionment while working within the US Forest Service in the 1970’s and 80’s, when forest owners and workers were pitted against environmental activists “in a seemingly intractable, polarizing conflict over livelihoods versus forest protection.” Leaving the Forest Service, he went on to establish an independent consulting practice to improve forestry operations, develop and implement third-party certification protocols with SCS, and help draft the first multi-stakeholder international standards for responsible forestry practices as part of the founding board of the Forest Stewardship Council (FSC). Along the way, he helped redefine the meaning of sustainability in the forest industry, from one which had focused narrowly on sustained yields, to a much broader definition encompassing a wide range of environmental, social and economic considerations. 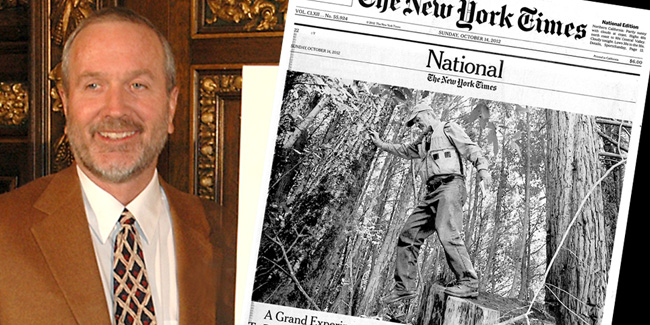 Brendan Grady, SCS’ Director of Forest Management Services, noted, “Robert’s drive to continuously learn, to consistently work long days and nights, to be a road warrior travelling all over the world, is what enabled him to be a key contributor to defining sustainable forestry practices to help us manage and preserve precious resources while not losing sight of the key economic drivers that are important in resource management.”

At a recent celebration of Hrubes’ work legacy, certification clients lined up to bear witness to his meticulous scrutiny and integrity as a third-party auditor, which they agreed made them better stewards of the forest.

Collins Pine was one of the first US companies certified under the FSC standard for its forestry practices, approaching its 25th anniversary of certification in 2018. “Our company has worked with Robert for a long time,” said Paul Harlan, Vice President of Collins Pine.  “When I think of Robert, the word ‘respect’ comes to mind – your respect of us and other human beings and other people, who they are and what they stand for, whether you agree with them or not, is a testament to you as a person and that shines through everything you do.”

Sandy Dean of Mendocino and Humboldt Redwood Companies explained that achieving the rigors of certification was no easy task. “I met Robert in late 1997 or early 1998. We were at the beginning of a journey to try and do a better job on redwood timberlands that had been managed in a tough and traditional industrial way,” he said.  Though its first attempt to achieve certification failed, the company bore down to address each of the complex issues Hrubes had raised during the certification audit, and on its second try, succeeded in getting 350 sq. miles of coastal redwood forest certified. This was followed eight years or so later by another 350 sq. miles, and the combined certification probably helped show other redwood forest management companies that they could do something similar.  “All of us want to feel like our work makes a difference,” said Dean. “I want to say to you, Robert, that your courage and willingness to bet on us early on at MRC made a big difference for forestry on the north coast.”

Gary Rynearson of Green Diamond Resource Company, certified by SCS in 2013, added, “I’ve recommended Robert to other companies, too, because we knew that by hiring Robert, he had made us toe the line to the Nth degree of the standards.”

As Hrubes and his team have long understood, marketplace demand is essential for forest management reform to be effective.  For this reason, robust chain-of-custody protocols were needed to assure that products labeled as coming from certified forests were the real thing.  Marion Hunt, co-founder with Jeff Hunt of EarthSource Forest Products (PALS Inc.), one of the pioneers in retailing FSC certified products, agreed.  “Robert and SCS were determined to do it properly. We joined with them because they were doing the right thing, and because we wanted to be with a company that did the right thing.  That not only speaks for Robert as a leader, it speaks for everybody.  I have a lot of respect for what you’ve done for sustainable forestry, for sustainability in this world, and I want to thank you all for that.”

In the early 2000s, as carbon markets began to evolve, Hrubes and SCS trained their sights on helping to set standards for forest carbon footprinting and verification of carbon offsets.  Hrubes was prominently featured in a New York Times article published in October 2012, conducting measurements on a steep forested slope in northern California “to calculate how much carbon could be stored within the tanoak, madrone and redwood trees.”

Dr. Tim Robards of New Forests, which manages over $2 billion in capital for investment in sustainable timberland and environmental markets, described Hrubes’ pivotal role in developing the carbon protocol for the state of California.  “Robert was always there all the way to the end to bring sanity and realism to all the crazy ideas that any committee can think of. That made the program successful.  If you look across the US at private forest lands, a large percentage are now under these carbon projects and being managed more sustainably. And in California, on private timberlands alone, nearly 10% are in these carbon projects. That’s a testament to the good work that was done.”

Over his career, Hrubes’ passion, authoritative attention to detail, respectful engagement, commitment to multi-stakeholder process, and refusal to compromise principles, made him a formidable negotiator for tough standards in the world of forestry and forest products arena. These same attributes translated well into his role as mentor for both SCS staff and university students.

Steve Auten, forest manager at Cal Poly Swanton Pacific Ranch, and a one-time Master’s student working with Hrubes, reflected, “Who are the people in your life who affected you the most, who changed how you thought about things, shaped our lives and how we thought about forestry and our passions? Robert was definitely one of those people.”  Sarah Harris, SCS Natural Resources Managing Director, and Christie Pollet-Young, SCS Director of Greenhouse Gas Verification, seconded the sentiment, acknowledging Hrubes’ efforts to build certification programs “built on a foundation of integrity” and teaching staff how to “become world-class auditors.”

A more extensive compilation of comments celebrating Hrubes’s career is found here. Although Hrubes is officially retiring from his current role, he plans to stay engaged with reform of forestry practices for years to come.  And no one would expect anything less from a man who has dedicated himself with such passion to the path of sustainability.