More than 1,000 responses were received as part of the 9th annual rankings, which polled the market as to who are the most highly regarded players in 16 categories of the voluntary carbon markets.

Demand for carbon offsets has rocketed despite a lack of clarity over what role, if any, they will have in a possible UN-backed international emissions market arising out of the Paris Agreement.

Issuances of new credits leapt 70% in 2017, according to EcoSystem Marketplace, and the first quarter of this year has seen a similar level of activity.

The market is now at a turning point, many participants believe, as national negotiators are meeting this week in Bangkok to thrash out implementation guidelines for the Paris Agreement, ahead of the key COP24 meeting in Poland in December.

How governments will deal with voluntary offsets under the Paris Agreement, is “the greatest point of uncertainty” in the market, says Martijn Wilder, partner at Baker McKenzie, which held on to its title as Best Law Firm.

Others point to marketing reasons as a major factor driving demand.

Many voluntary market projects have significant environmental and social co-benefits in addition to emission reductions and these ‘sustainability stories’ help companies demonstrate how their investments achieve impact, says Gareth Turner, director at Numerco, which was voted Best Broker for the fifth consecutive year.

A growing number of companies are also keen to show how their activities align with the Sustainable Development Goals, notes Edward Hanrahan, CEO of ClimateCare, which retained its title as Best Project Developer in public health.

And another important driver is the pressure for improved disclosure of climate-related risks, from initiatives such as the Task Force on Climate-related Financial Disclosures.

David Antonioli, CEO of Verra, which manages the Verified Carbon Standard – again voted Best Voluntary Standard – warns: “The minute you disclose that you are not doing anything, there is pressure to do something to show … that you are taking positive action on climate change.

Such pressures seem here to stay so, barring a major shock in the COP24 negotiations, voluntary demand for carbon offsets look set to continue booming.

The table below gives the full list of winners: 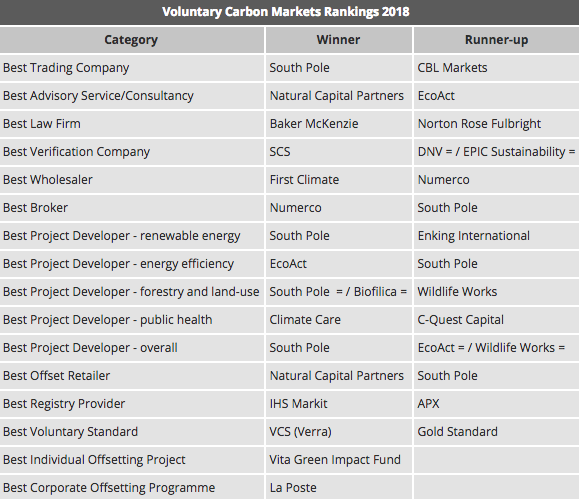