The rapidly growing role of biofuels in the economy has important ramifications for sustainable development worldwide. On the one hand, biofuels offer significant potential benefits as alternatives to traditional energy sources in the transportation sector. On the other hand, the land use associated with biofuels production has generated widespread debate about the best use of arable lands, impacts on world food prices, and the sustainability of production practices. In response, a lattice of regulatory policies, reinforced through voluntary third-party verification, has emerged globally.

This article provides a short primer on global biofuel policy and the drivers behind it. Readers are also encouraged to register for a free webinar September 12th featuring a distinguished roundtable of global policy experts to learn more.

The Growth of Biofuels

Biofuels are liquid fuels derived from recently living –that is, biological – matter. When most people talk about biofuels, they’re referring to biodiesel, renewable diesel (also “hydrotreated vegetable oil” or HVO), and gasoline substitutes, such as bio-ethanol and renewable gasoline (e.g., renewable naphtha). In this current period of low petroleum prices, the success of biofuels depends largely on supportive public policy. This makes sense when biofuels do what they are intended to do: promote energy independence, support rural economies, and reduce climate change emissions, without significant downside trade-offs.

Biofuels production has been catalyzed by the search for alternatives to fossil fuels with lower environmental and social impacts. As climate change has become one of the most important societal challenges, public policy is correspondingly aligning around the support of biofuels technologies that bring climate benefits, especially in the three most important biofuel markets – the United States, Europe and California. These policies support the growth of low carbon fuels, and next-generation biofuel technologies with improved carbon benefits. A short description of the basics of each policy framework in these major markets follows.

The Renewable Fuels Standard 2 (RFS2) is the dominant renewable fuels regulation in the United States. Established in mid-2010, RFS2 created four nested renewable fuel categories with different characteristics and GHG reduction requirements. Additionally, land use criteria built into RFS2 prohibit the use of feedstock grown on lands not already in agricultural production as of December 19, 2007. (RFS’ definition of Renewable Biomass can be found in the U.S. Federal Register, Vol. 75, No. 58, page 14681.) These four categories are:

Obligated parties – that is, entities that bring fossil fuels into the market, such as petroleum refiners and importers – are required to hold credits at the end of each calendar year meeting each category type, commensurate with the volume of fossil fuels they bring into the market. These credits, known as Renewable Identification Numbers (RINs), are created when biofuels enter the market via biofuel producers, importers, or other entities. The relative number of credits that obligated parties must hold in each category is defined by the Renewable Volume Obligation (RVO), released each November. Some volumetric requirements are set by statute, and in some cases, these volumes are set each year when the RVO is released.

While the volume of renewable fuels (D6 RINs) that obligated parties are required to hold is capped at 15 billion gallons per year, the volumes of advanced biofuels and cellulosic biofuels are intended to increase as new facilities come online. RFS2 sets a target volume of total renewable fuels across all 4 categories of 36 billion gallons by 2022, with all growth between now and then (~ 21 billion gallons) in the advanced biofuel category, which includes biomass-based diesel and cellulosic biofuels. (Cellulosic biofuels, the category intended to have the largest growth by 2022, have not commercialized as quickly as anticipated, causing some to call for more realistic RVO growth targets.) Biofuel advocates will need the support of environmental advocacy organizations to maintain strong RFS volumetric targets, and will need to demonstrate that there are technologies and feedstocks capable of meeting the increasingly stringent GHG reduction targets of 50% and 60%. 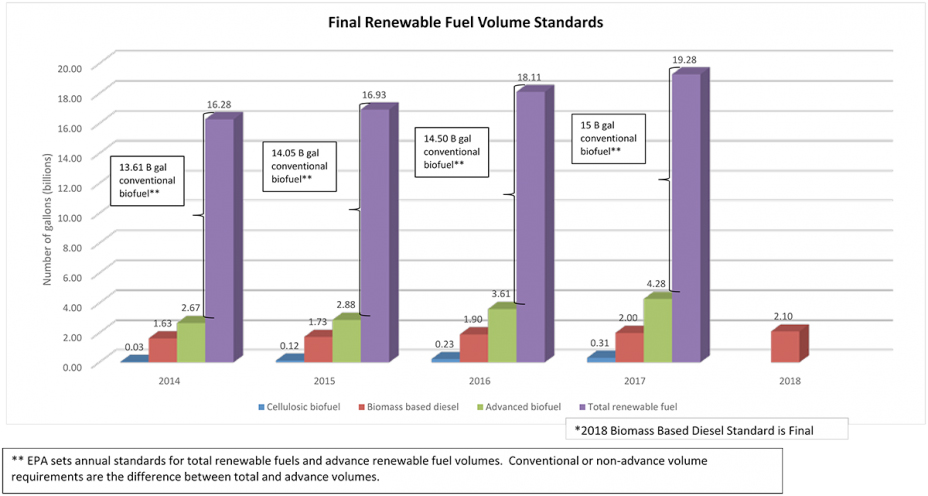 The European Renewable Energy Directive (EU RED) became law on 1 January 2018, setting binding renewable energy fuel targets for each member-state and the EU community, driving the overall EU community towards a minimum binding target of 20% renewable fuels by 2020. At last check, nearly half of the European countries have met their individual targets, and the EU is well on its way to meeting its overall 2020 targets.

In order for biofuels to qualify as meeting these binding targets, certain sustainability requirements must be met, including a minimum level of carbon reduction, and protections from the loss of forests, wetlands or other natural ecosystems. In order to ensure that biofuels comply, the European Commission has “out-sourced” the monitoring of these criteria to independent sustainability schemes, which in turn incorporated the RED criteria into broader sustainability requirements, verified by third-parties such as SCS Global Services. Examples of well-known sustainability schemes approved by the European Commission include the Roundtable on Sustainable Biomaterials (RSB), the International Sustainability and Carbon Certification (ISCC), Bonsucro (sugarcane only), and the Roundtable on Sustainable Palm Oil (RSPO).

The RED has required that biofuels entering into the market meet a minimum 35% GHG reduction requirement. This threshold requirement will increase in January 2018 to 50% for existing facilities and 60% for facilities that started operations after October 2015. In addition, some countries such as Germany have implemented a new GHG Quota requirement alongside the Renewable Energy Directive, effectively replacing a renewable fuels requirement with a carbon reduction requirement, thereby creating financial incentives for low carbon biofuels to enter into the market, similar to a Low Carbon Fuels Standard (this is discussed in greater detail below).

On November 30, 2016, the European Commission published a proposal for a revised Renewable Energy Directive, known as the RED II. The RED II seeks to phase out the use of biofuel feedstocks used for food, and sets a new renewables target for EU member states for the 2030 time horizon. While the final language of the RED II is still being negotiated in Brussels, there is little doubt that biofuels will need to meet significantly more aggressive sustainability targets in order to comply with future European policy requirements. 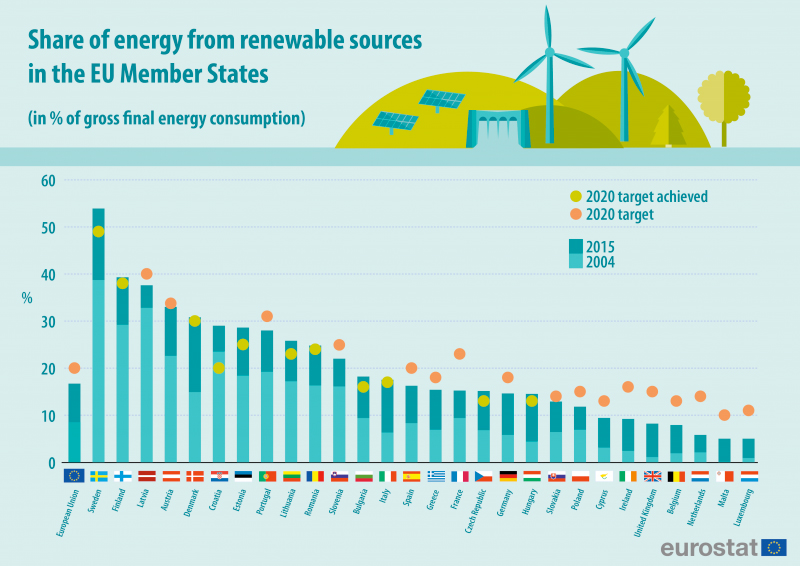 The Low Carbon Fuels Standard (LCFS) is a novel program started in California. It has since spread to a number of other states and provinces on the west coast of the U.S. and Canada, as well as some European member-states, where it is known as the GHG Quota obligation.

Rather than set volumetric requirements for the use of renewable fuels, the California LCFS incentivizes carbon reductions, regardless of the fuel type or feedstock. In contrast to the RFS and RED, the LCFS does not even require that fuels be derived from renewable sources; as such, it can be used, for example, to incent the use of lower carbon fossil fuels. The carbon incentive is created by requiring obligated parties to decrease the carbon intensity of their overall fuel mix each calendar year. California has set separate carbon reduction compliance curves for the diesel and gasoline fuel pools, with a target to reduce the overall fuel mix to 10% below 1990 levels by 2020. The California Air Resources Board (ARB) is currently in the process of resetting the LCFS compliance curve, taking into consideration recent legislation (SB 32), which set a 40% GHG reduction threshold for all sectors by 2030. ARB’s preferred scenario, described in a concept paper released in August 2017, sets an LCFS target of 18% carbon reductions for transportation fuels by 2030, compared to a 2010 baseline.

A number of changes are currently underway in the California LCFS program. These changes include the addition of third-party verification similar to the European sustainability schemes used to satisfy the EU Renewable Energy Directive, and the upcoming inclusion of renewable jet fuel for LCFS credit generation. While the rulemaking process for the LCFS is still underway, there is little doubt that demonstrating the potential for low carbon fuels to significantly contribute to California’s ambitious climate goals is the primary objective of this innovative program. 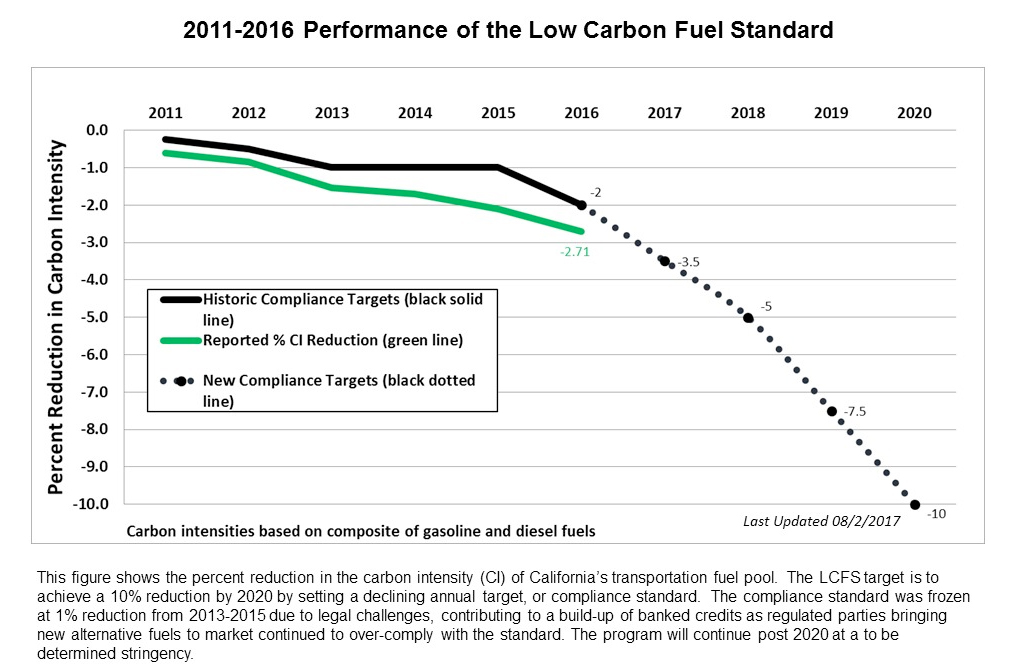