It’s been a heck of a year for Midwestern farmers. The worst flooding since the 1993 “Great Flood” completely disrupted the growing season across the region.

Living in Saint Louis, I am acutely aware of the flow of water through America’s heartland. We are at the confluence of the country’s two longest rivers, the Missouri and the Mississippi [USGS]. Rainfall in any of a dozen Midwestern states and parts of Canada will eventually flow by Saint Louis. We are proud to be called the River City, but in years like this one, the name can be more of a curse than a blessing. As the two rivers overflowed their banks this past spring, it was clear that the farmers upstream were having a hard go of it.

Recently the USDA quantified the impact of the flood when it released preliminary numbers on prevented plant acres for the season. The numbers are astounding: over 19 million acres (about 29,000 square miles) went unplanted this year, the highest acreage on record. It’s an amount of land that is almost too large to picture, roughly the size of South Carolina. Many fields were too flooded to plant and even amongst those that were workable, close to 1 million acres failed after planting. All told, 8.66% of American corn, soy, and wheat acreage either went unplanted or failed after planting this year.

While these numbers are record-setting, the nuances here are worth exploring. Not only did 19 million acres not get planted, but on top of that, the crops that did get put into the ground were not planted on time. During this deluge of snowmelt and spring storms, the fields were largely barren because farmers could not work the ground during the spring planting season. That’s a massive amount of land with nothing to hold the soil in place in the midst of historic inundation. I have not found hard numbers, but the runoff must have been on a scale that’s almost incalculable.

Losing Ground
This runoff has numerous implications. Contamination of waterways with agricultural nutrient pollution has effects across the country, from cancer-causing nitrates in midwestern drinking water [EWG] and algal blooms in all 50 US states [US EPA], to an ever-growing dead zone in the Gulf of Mexico.

Beyond water issues, our topsoil is in a dramatic state of disrepair. Soil is the lifeblood of agriculture, and conventional production practices are poorly equipped to preserve and restore this precious resource. Healthy topsoil has a higher level of organic matter that mitigates climate change by storing carbon, increases fertility for crops, and improves resilience by moderating the impacts of both floods and droughts. It is magical stuff. Unfortunately, as reported by the World Wildlife Fund, the earth has lost over half of its topsoil in the past 150 years, and much of this loss can be directly attributed to the production practices of modern agriculture.

This is critical because as the topsoil degrades and becomes less productive, conventional wisdom is to double down on standard agricultural practice. More chemical inputs. More tillage. More runoff. More of the same approaches that have left us unprepared for adaptation to a changing climate. It is a negative feedback loop that requires a systemic change, and it all comes down to the soil.

Reasons for Hope
Looking ahead, we need to find ways to make our agricultural lands more resilient, and indeed, transform our lands into more active carbon sinks to help solve the climate change problem. Fortunately, we already have the tools in agriculture we need to save our soils. In my next article, I will highlight some of the initiatives that excite me, that make me optimistic. 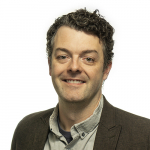