Organizations around the world are harnessing the power of the land to sequester carbon dioxide in the fight to mitigate climate change. Stepped up efforts by environmental non-governmental organizations, private project developers, and municipalities to maintain and enhance healthy forests are delivering direct climate benefits, and in many cases, financial returns as well.

Carbon Offset Projects Come in All Shapes and Sizes

Projects have been implemented to reduce deforestation and forest degradation (REDD), improve forest management, and reforest degraded lands. These projects are generating documentable greenhouse gas (GHG) emissions reductions that can be sold as carbon offset credits.

The scale of these projects can be impressive. For instance, the Cordillera Azul National Park REDD+ Project is over 5000 square miles (about 1.3 million hectares), and is credited with more than 1.5 million tons of GHG emissions reductions each year. Located in Peru where the Andes meet the Amazon Basin, this forest is a rich biodiversity treasure, home to over 6,000 plant species and more than 80 large and medium sized mammals, 180 fish species, and 800 bird species. Through an innovative public-private partnership, this project is protecting this unique wildlife, while restoring lands previously degraded by coffee, cocoa and other agricultural production.

On the other end of the spectrum are projects on very small land holdings. For example, the City of Arcata committed to retaining and enhancing the carbon in its community forest through Improved Forest Management projects with the Climate Action Registry. It was the first local government to have such projects verified; the smallest of its three tracts is just 171 acres. By attempting to mimic the old growth redwood forest conditions, these public lands have also generated carbon revenue by selling offsets to be retired under PG&E’s ClimateSmart program, which allows customers to offset the GHG emissions from their homes or businesses. 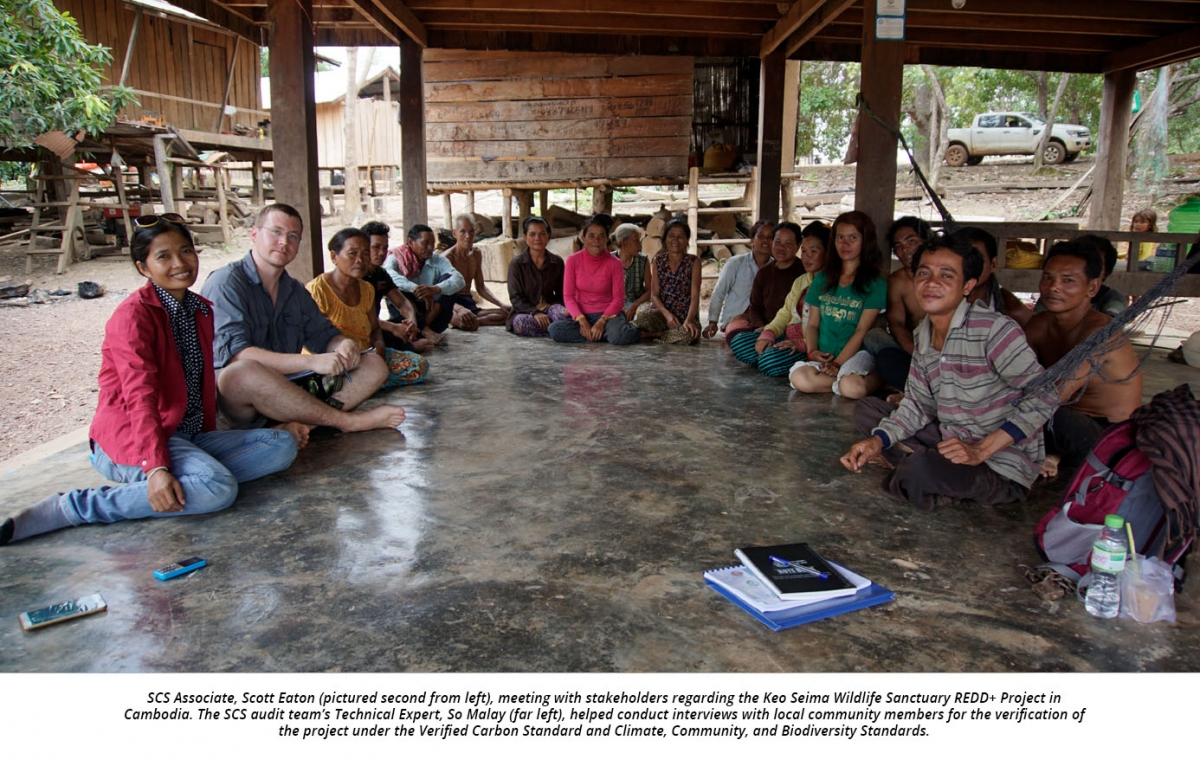 Whether a massive REDD project or one reducing the logging impact on just a few hundred acres, project developers are hoping to capitalize on the value of trees being kept in the ground. Utilizing established project design standards and emissions reduction calculation methodologies, and demonstrating compliance either through a voluntary standard such as the Verified Carbon Standard, American Carbon Registry, or Climate Action Reserve, or a government compliance program such as California’s Cap-and-Trade system, project developers are banking on the growth in the offset credits market to recoup their investments.

To date, this market remains unpredictable. According to two of Forest Trends’ latest Ecosystems Marketplace reports, Unlocking Potential: State of Voluntary Carbon Markets 2017 and Fertile Ground: State of Forest Carbon Finance 2017, market volume in tradable carbon offset credits over the past several years has hovered between 63 and 84 million tons of carbon dioxide equivalent, valued at $191.3M. This compares to the headier days of 2008 to 2010, when volume exceeded 100 million tons. Prices are also highly variable, depending on the nature of the project, from $0.50 - $50/tCO2e, averaging about $3/tCO2e across all project types. The price paid for forest carbon offsets, though, is hovering around $5/tCO2e. But despite relative affordability, far more credits were generated than sold, and finding buyers has often proven difficult. As Forest Trends states, “It’s a buyers’ market—almost as many offsets remain unsold as sold.”

That said, the number of projects continues to grow, in light of increased awareness of the climate crisis, recognition of the need for market-driven solutions, and consensus on the crucial role that forests and other land-based systems must play. Independent validation and verification of such projects in achieving their objectives is a core component of the carbon offset process. This verification confirms that the emissions reductions are real and “additional,” – that is, the reductions would not have been achieved without the project.

To date, out of the nearly 300 billion tons of carbon stored in the world’s forests, just a fraction of this amount (about 400 million tons) in forest carbon offset credits have been independently verified. SCS Global Services, a leading global certifier of environmental and sustainability achievements, has verified more than 150 million tons of these emissions reductions from more than 100 projects in 25 countries, covering a combined area of over 23,000 square miles (nearly 6 million hectares). After years in the trenches, evaluating many different types of projects and practices, we have had a close-up view of what works and what doesn’t.

Factors Contributing to Success or Failure

Complexity is the norm, not the exception, for most forest carbon offset projects. A variety of factors influence the complexity of a project and the audit. First, of course, are the specifics of the project type and activities proposed, which literally vary all over the map, depending on forest type, indigenous wildlife, and community socio-economic needs. Another factor is the specific calculation methodology applied, which determines the relevant carbon sinks, including sources like belowground biomass and soil carbon, and GHGs with greater warming effects than carbon dioxide, such as methane and nitrous oxide. Whether different areas of the forest are easily accessible and contiguous, or are spread out with a poor road network, and whether the project has a simple versus complex ownership arrangement, can also make a significant difference in the ease of documentation and auditing.

One of the most important lessons for project developers is to ensure that the forest inventory used to calculate emissions reductions is rigorous. A quality forest inventory forms the basis of the project documentation. Projects with a high level of inventory precision and clear processes for obtaining measurements have a greater chance of success than those without. Local timber “cruisers” (the foresters who record measurements of trees on samples of forest stands) and specialized forestry experts can save time and money, and help ensure that documentation is well-written and complete. Project documentation that shows that the project developer has a detailed, comprehensive understanding of the relevant criteria and methodologies is always greatly appreciated by the audit team.

For example, Finite Carbon, a prolific project developer, has an excellent track record of precision in its audits. Having independently assessed several of its Improved Forest Management projects from Alaska to Maine, including site visits involving re-measuring forests, SCS auditors have been consistently able to confirm the reliability of project documents reflecting good forest inventories.

This is not always the case. SCS has audited projects of much lower technical quality, with personnel seemingly unprepared for audits or lacking evidence to support their documents. For carbon projects, the measurement and monitoring tasks required can be of a higher standard than what some may be used to for other forestry purposes, such as a company’s own private harvest and investment planning. Another problem we have observed is failure by project developers to obtain clear right of use or land title, which is a requirement for eligibility under all GHG Standards. For project standards and types where local stakeholders are required to play a role, inadequate engagement with local communities in project design and implementation is another potential stumbling block.

For the great majority of projects which apply criteria for local stakeholder involvement (such as through the Climate, Community, and Biodiversity Standards), SCS has been pleased to see communities receiving valuable co-benefits. Particularly in areas where local people rely on the forest for their livelihoods, or on smallholder farming on forest edges, engagement based on the principles of Free, Prior, and Informed Consent (FPIC) increases the overall value of the project. Activities that provide alternative incomes and training, as well as other services such as health and education facilities, can help ensure that the project has lasting effects. For instance, as shown by Disney’s purchase of $2.6 million worth of carbon credits from the Keo Seima Wildlife Sanctuary REDD+ Project in Cambodia, developed by The Wildlife Conservation Society, projects that emphasize community co-benefits have some of that value reflected in the price of their associated offsets as well.

As the market for carbon offset credits grows along with the urgency of climate change mitigation, landowners and project developers have also worked within GHG standard frameworks to expand the range of project types eligible to receive credits. While this article has focused on forest carbon offsets, the establishment of methodologies to calculate emissions reductions related to sustainable agriculture, grasslands, and mangroves has opened the door to an increasingly diverse range of projects with the potential to improve the land and benefit communities while helping our climate. All of these approaches are essential as we piece together a patchwork of solutions to sequester carbon dioxide in order to maintain a livable climate.